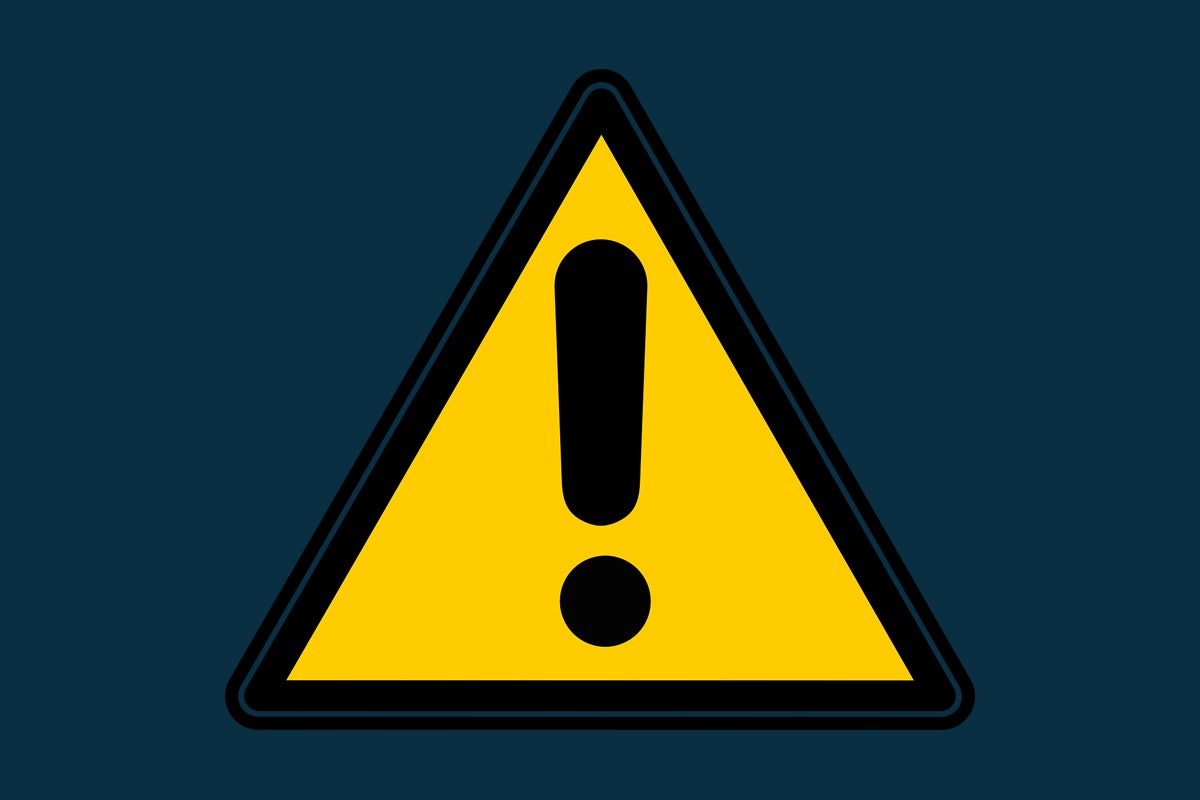 5G, the mobile industry’s oft-cited savior for slow smartphone sales, isn’t exactly lighting the world on fire — especially here in America. In fact, if anything, it appears to be doing just the opposite: 5G is actively acting as a negative asterisk to otherwise fine phones and encouraging people to avoid them entirely. And really, who can blame ’em?

Let’s back up for a sec and set the stage to this story — because there’s a fair amount of context to consider here. Smartphone sales in general, y’see, haven’t been in particularly great shape for quite a while now. And it’s no wonder: In spite of endless efforts to come up with flashy-seeming “innovations” like folding phones and a variety of curving, sloping, and suggestively gyrating screens (okay, so maybe not that last one, but it’s probably just a matter of time), people are hanging onto their perfectly fine old devices for longer and longer.

So the companies that make their money by selling said devices have been growing increasingly desperate for an answer. And most of ’em seemed downright convinced 5G would absolutely, positively, no doubt whatsoever be the magic ingredient that’d have everyone clamoring to open up their wallets and move into some shiny new top-dollar hardware.

Think I’m exaggerating? At a lavish media event in Hawaii just before the start of 2019, a Verizon spokesperson told reporters the carrier “believes customers will pay for utility and value” — going on to say, confidently, that “there will be that, definitely, in 5G.” (“Plus, we know we can tack pretty much anything onto people’s phone bills and get away with it,” the spokesperson presumably forgot to add with a cackle.)

Sprint’s former managers were even more optimistic, telling investors in late 2018 that the carrier would “have a lot of room to increase our price of unlimited” and that it was “looking at 5G as an amazing opportunity for the company not only for the position of the company, but also to charge for the blazing fast speeds.” (Weird how we haven’t seen that in an ad yet, isn’t it? “5G: An amazing opportunity for us to charge you more!”)

Even as recently as this past January, industry analysts were saying 5G would invariably, absolutely, definitely cause smartphone sales to rebound.

And yet here we are.

Now, let’s make one thing clear: There’s an awful lot happening at once right now — not least of all that whole global pandemic thing you might’ve read a thing or two about — and it’s impossible to draw any direct connections between any single cause and the broad effects on smartphone sales that we’re seeing. But it also seems impossible not to suspect at least some manner of relationship between the all-in, no-choice-but-to-embrace-5G mentality device-makers are adopting with Android flagships right now and the overall indifference being expressed by mobile-tech users about the resulting products.

So far in 2020, phone sales are, to use the technical term, totally in the crapper. IDC found phone shipments dropped nearly 12% worldwide in the first quarter of the year — the largest year-to-year decrease the firm has ever measured. And among the regions that contributed most prominently to the “drastic worldwide decline”? Yes, indeedly: the United States, where smartphone sales saw a whopping 16% drop from the previous year.

Samsung’s heavily hyped 5G-packin’ Galaxy S20, specifically, is apparently seeing sales that are less than half what the company’s had with its past couple flagships — both in the U.S. and internationally.

And here’s where things get especially interesting: When people are spending money on new Android devices these days, they’re opting increasingly for lower-priced, value-minded models over the top-dollar, flagship-caliber offerings.

Well, consider a few fun facts that seem at least somewhat related to all of this:

1. 5G is raising the cost of flagship phones considerably

This year’s Galaxy S20 started at — started at — a thousand bucks. That’s up $250 from last year’s Galaxy S10 model. Even the typically “value”-level OnePlus priced its 2020 flagship at $700, which was a $100 jump from the somewhat similar (and released just six months prior) previous-generation phone.

In typical times, a thousand-dollar phone would be a tough enough pill to swallow. Factor in the tightened budgets and general uncertainty so many people and companies are facing as a result of the coronavirus crisis, and it suddenly seems like an extraordinarily unfortunate time to have device prices shooting so high.

And no one’s really contesting that the main cost-raising variable in these phones is the added presence of 5G. We knew that was coming when we started hearing about plans for these products last year — specifically, when the company that makes the processors powering most current Android flagships started talking about its top-of-the-line offering for 2020 devices.

2. Most Android phone-makers see no choice but to go with 5G for their 2020 flagships

Qualcomm, the aforementioned supplier of most high-end Android phone chips, forced every Android device-maker who wants its top-of-the-line processor to embrace 5G as part of the package for 2020. And that package includes not only the regular chip, which traditionally featured an embedded modem within it, but also a new separate 5G modem component that then requires a more complex internal design.

And guess what? All of that means the associated phones cost more moulah to make. And we all know to whom that added expense ultimately gets passed.

So unless a device-maker is willing to go with a lower-end processor and risk the ire of spec-obsessed reviewers (something a couple of smaller players appear to be considering), there’s no way around accepting 5G as part of the equation for a top-of-the-line, 2020 phone.

3. The presence of 5G doesn’t really provide anything of value to most of us right now

We’ve talked about this before, but it warrants revisiting: High-tech and futuristic as it may sound, having 5G in your phone probably isn’t gonna amount to much when it comes to real-world benefit for you — not now, at least, and probably not too soon into the foreseeable future.

It doesn’t take much digging to see why. Plain and simple, 5G coverage is still more the exception than the rule here in the U.S. at the moment. That seems highly unlikely to change overnight. And even in places that do have it, the short-range and high-interference nature of the technology means it still isn’t actually gonna be available in most areas.

Heck, even when 5G is actively available, the results are often underwhelming. I mean, look at these excerpts from reviews of the 5G-capable Galaxy S20 — that aforementioned $1,000-and-up phone. There’s one consistent trend, and it sure is something.

As for 5G, carriers are still building out the network, so you can’t get connectivity anywhere except for pockets of coverage in certain cities. And when you can connect to 5G, the speeds aren’t much faster than 4G LTE. That’s been the case using a T-Mobile SIM on this phone. I also used a Verizon SIM in my testing, and while I was able to get blazing-fast speeds of up to a gigabit in select areas near a 5G node, I had to go to those nodes and rarely came across them naturally.

The Galaxy S20 and S20 Plus are the first mainstream 5G phones, and that fact is a huge part of their marketing push. Unfortunately, the carriers I have to test on in the Bay Area — T-Mobile and Verizon — don’t offer 5G service here yet. Even if you do live in a 5G area for your carrier, I’m far from convinced that the extra cost that 5G adds to the phone is worth it.

Should you buy this phone, you’ll get a mixed bag of 5G experience and your expectations for what 5G will produce should be low. … The 5G connections I’m getting are not great. In fact, I’m pretty sure my 5G speeds and connections are lower and less stable than the previous 4G LTE connections I had from similar locations. … 5G is here, technically, but it’s nowhere near the future we keep hearing about from all of the parties looking to get rich(er) off of it. Unfortunately, we’re being forced to pay for it now.

You get the idea: By most assessments, 5G is raising the cost of flagship phones while providing little in the way of real-world value. Combine that with the increasingly attractive array of midrange phone options coming out these days — and add in the effects some people and companies are now seeing on their budgets from coronavirus-related cutbacks — and, well, it’s hard not to wonder if this could be the perfect storm that turns folks away from high-priced flagships and onto the more affordable midrange alternatives.

And that’s a dangerous slope to approach — at least, from the perspective of the companies selling these phones.

We talked about this on my podcast last week, and it’s an interesting possibility to ponder: What if, as a result of all of those factors we just mentioned, a significant percentage of the phone-buying public opts to go for a midrange model instead of a flagship phone for their next device, whether on an individual or a company-wide level? And what if, as I contend would happen for the vast majority of people, most of those newly minted midrange-phone-buyers then realize they aren’t giving up anything of great significance and are still getting all the parts of the phone experience that actually matter to them or their employees — only at a fraction of the cost?

The harsh reality is that for most people, the difference between a flagship phone processor and a midrange phone processor is never going to be noticeable. The difference between premium external materials and more mundane plastics is going to be of little to no concern. And the lack of marketing-friendly bells and whistles will quickly be forgotten. As long as they’re getting a capable camera, a commendable user experience, and a respectable level of post-sales software support (something an average consumer may remain ignorant about but that any business user or enterprise purchasing department should certainly be considering), most phone-owners are gonna be perfectly content.

And especially once you realize that a phone like the midrange Pixel 4a effectively costs you $11 a month (assuming you keep it for the full three years in which it’s supported and thus fully advisable to use) whereas a top-of-the-line, flagship-caliber 5G phone like the Galaxy S20 comes out to four times that amount, $44 a month (again, assuming that you keep that device for the full two years in which it’s supported) — well, it’s hard to see most individuals or IT decision-makers thinking that higher lifetime cost is worth their while once they’ve begun to explore the options.

In a sense, then, 5G could end up having the opposite effect of what the phone industry wanted, thanks to the way in which it’s being forced upon everyone before the technology is fully ready. And by the time the tech is ready, it’ll likely have trickled down to those midrange-level devices and become available in a far more affordable and less compromise-laden form.

Funny how things work out sometimes, isn’t it?